Only a small contingent of seven runners met at Brownhill’s on what was a gloriously sunny Easter Sunday morning. Many of the regular Sunday morning crowd either had family commitments or must have forgoten to change their clocks to British Summer Time and therefore were still lying content under warm bed sheets.


Brownhill countryside visitor centre is the traditional meeting point for the Saddleworth Runners Club’s Sunday morning outings. Operated by Oldham Council’s Countryside Service, the visitor centre and Lime Kiln Café is situated in the heart of Saddleworth, on the banks of the Huddersfield canal.


Leaving the visitor centre car park, at just gone 10.00am, we headed North along the canal for a short while before picking up the A670 for the short stretch of tarmac to the Navigation Inn. Passing through the little wooden gate, at the side of the pub, we ascending the series of paths which provide a route up onto Lark Hill. Turning North along Harrop Edge Lane we were confronted by a cold wind blowing in from the East. It was these chilling Easterly’s which had brought in the recent bout of snow over the past weeks which, although now receding, as the spring temperatures begin to rise, was lying in deep drifts upon the frozen ground.


As we dropped into the saddle before Hunters Hill a couple of our group muttered suggestions of dropping down past the Saddleworth Hotel into the Castleshaw Valley, to avoid the wind, and follow a route back along the Tame Valley Way. Not wanting to miss the delights of running on the high moors on such a beautiful morning I instigated a coup and led a break-away group in the direction of Millstone Edge. 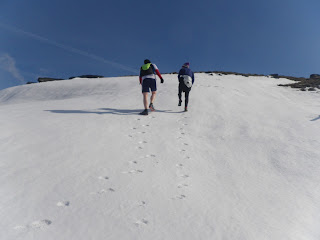 Parting company with the others we headed for Bleak Hey Nook and, after crossing the normally busy A62, passed behind the old, now long derelict, Horse & Jockey pub and headed up Whimberry Lee Lane. At Stanedge the remaining five ascended pure white, crisp snow fields to attain the trig point on Millstone Edge. Under a clear sky there was not but a breath of wind on this rocky edge which marks the Lancashire/Yorkshire border. The views all around were magnificent and far reaching and we reflected on what the others were missing after opting for lower ground.
Whilst today was glorious this rocky edge is often battered by strong winds, the year round. In bad winter weather this must have been a grim posting for the Roman soldiers stationed at the fort in the valley below, who’s job it was to guard the military road from Chester to York. One of a series of Roman Forts the original stronghold covered over three acres and garrisoned around 500 infantry. At some point it was abandoned until being re-occupied in the early 2nd century A.D. as a small out-post. 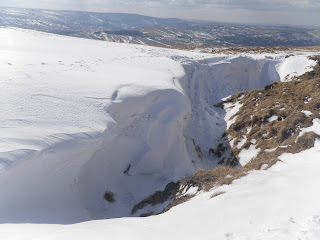 Following the Oldham Way we made good progress over the firm snow, the frozen surface of which was yet to thaw under the warming sun. Looking over to the West, the Denshaw reservoirs could be seen glistening in the morning sunlight.


Picking up the Pennine Bridleway we dropped down Moor Lane where it meets Ox Hey Lane, at the old Cross Roads known as Four Lane Ends. Continuing South we enjoyed running on the deep snow drifts that had completely filled the sunken track that is Broad Lane. The views down into the Castleshaw Valley were a delight as we headed towards Heights. 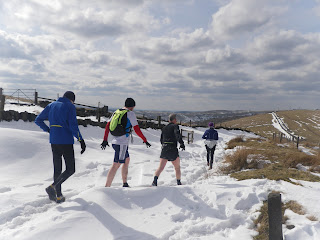 Although we wouldn’t be passing it today, St Thomas’s church is located just a few hundred metres further along the lane. Known locally as Height’s Church it has featured in many film and TV productions. Opposite is a small public house called the Royal Oak which is well worth a visit, if passing this way, as they are reputed to offer fine ales and good food.


Opposite the entrance to Spring Hill we turned South East, towards Grange, and descended the sunken bridleway, which is believed to have been an old packhorse road or ‘saltway’. This area of Saddleworth was part of Friarmere which in turn was part of the Roche Abbey estate.  Local historians believe that the Black Friars had a house or ‘Grange’ here which possibly lends its name to the area. 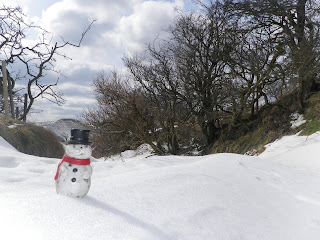 Our descent once again took us over deep snowdrifts and we eventually emerged at the ford which crosses Hull Brook. In summer, after a long run, crossing the ford offers a welcoming, cool relief to hot, tired feet. However, with the brook flowing cold from melt-waters gathered from the frozen moors high above the valley we chose to cross the wooden bridge, a little further upstream, and keep our feet warm and dry.

With our morning outing nearing the end we followed the course of Hull Brook, picked up the Tame Valley Way and followed its route through Delph and Dobcross and back to Brownhill’s in Uppermill.


We had had a fantastic run and marked the start of British Summer Time on what was a beautifully clear sunny morning. A nice hot brew and bacon butty was all that was now needed to end what had been a perfect Easter Sunday morning.
Posted by Chris M at 09:42